So this will definitely be one of those blogs that I forever go back to and update because I absolutely plan on having lots more tattoos than I have right now but gotta start somewhere.

At this moment in time September 2018 I have exactly three tattoos and it was recently a whole year since I got my first one. 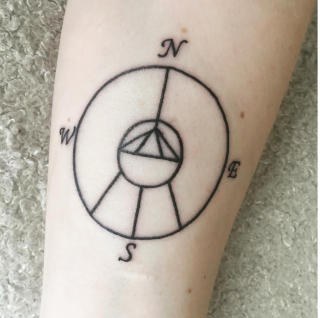 I had been wanting a tattoo, or this tattoo in particular, for so long but I wanted to make sure I got it at the right time.

This tattoo is a spell from the film Howl’s Moving Castle and is used when they need to move house (what a surprise right?). I got it tattooed on me soon after I found out that I had gotten into university and would be moving away for the first time in my life. Even though I only moved to Manchester, and come home pretty much every other weekend, it was still a big deal to me. I did personalise this tattoo slightly by adding the compass like directions around it, as a way to show that I can always find my way back home.

I got my second tattoo shortly after the first one. This one was more planned around the date than the actual design. It’s a friday 13th tattoo (as in the day not the films.) I’ve always wanted a tattoo done on friday the 13th because im a big believer in making your own luck in the world and also anything a little grim is my favourite. So, there was a tattoo shop that I knew of doing a deal on specific designs for this day, all we had to do was pick one and get it done! I chose the two hearts with “memento mori” written which loosely translates to mean “remember you must die”. I interpret as meaning YOLO in latin…very cool. 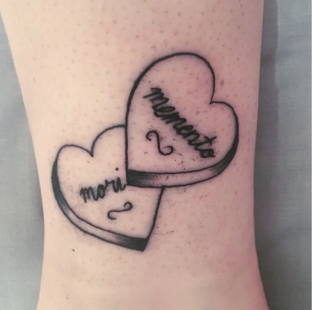 Also my best friend now has two hearts in the same position but hers say “yass queen” so we kinda have matching tattoos.

and last but definitely not least is my most recent tattoo 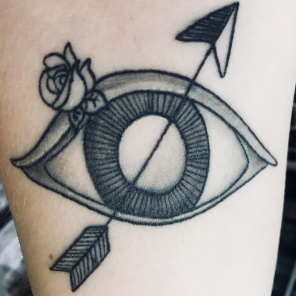 this eye is on my right arm and is a slightly adjusted version of a piece of art based around star signs (which im a big fan of if you don’t know). The artist has done quite a few of these collections but I chose this Sagittarius one because I like to add other meanings to my tattoos and to me the rose is a representation of the phrase – “beauty is in the eye of the beholder”. 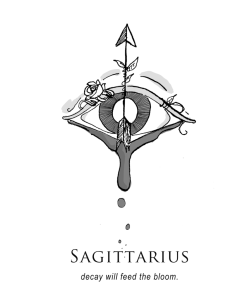 check out Amrit Brar. my design is from the “Shitty Horoscopes” collection in book IV: Resolutions

A tribute to my mum:
I’ve spent so long thinking about if I want one or what it could be, but then while going through an old memory box i found some notes she’d written to my dad and also a drawing she had done of a vase of flowers. I’m either gonna get the vase of flowers with coloured in lavender and forget-me-nots added or get one of the notes of her handwriting which says “take care of yourself” or “i love you x x x”. Not decided yet but i shall update you in due course when i get it done.

Twenty one pilots:
I always said that I didn’t wanna get any music lyrics on me because I don’t wanna regret it if i end up disliking their future music or they turn out to be an awful human being (which happens far too much). But im just hoping Twenty One Pilots wont fit into those because their music does mean to much to me. As cringey as it is they really did get me through the hardest part of my life so far and made me feel less alone when i was dealing with mental health issues. Not decided which lyrics i want yet but i know i do want something that will forever make me grateful to be alive and be proud that im still around.

Other ideas:
Semi colon for suicide awareness
11:11 for my belief in wishes
Venus sign for my love for women (myself included)
Large geometric drawing of half wolf/half deer on my thigh (how badass would this look?)

let me know any tattoo designs you want?

or if you don’t have any then why?

or if you think tattoo always have to mean something?
(I think my tattoos do but everyone else can put what they like on their body)

is there a specific tattoo style you love?

View all posts by JessaDxrling